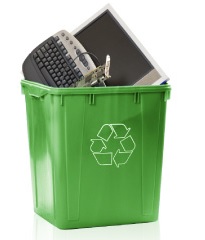 Last year, South Australia became the first state to ban televisions and computers from landfills. With the metropolitan area of Adelaide first to join the ban against e-waste on September 1st, 2012, followed by the rest of SA a year later, SA demonstrates its leadership in responsible e-waste disposal.

The National Television and Computer Recycling Scheme is funded by the computer and television industry and regulated by the Australian Government. The Scheme requires that television, computer and computer products manufacturers and/or importers play a role in the collection and recycling of e-waste. Industry players may do this by hosting e-waste take-back events where citizens can drop off e-waste or by collaborating with an existing recycling centre to help with the proper recycling of unwanted and scrap electronic products.

As the Scheme allows homeowners and small businesses to drop off e-waste at drop off locations or recycling centres free of charge, the barriers that lead to environmentally-responsible behaviour are lowered. Items that can be left at drop off locations are: televisions, computers, computer towers, monitors, keyboards, mice, printers and scanners. These items cannot be disposed of in general waste bins or commercial waste bins because these items require specialized processes and dismantling equipment to retrieve the valuable materials within them, especially metals such as gold, nickel and copper. These materials can be recycled and reused in other products. Zero Waste SA estimates that 1.5 million computers, which are 99% recyclable, are thrown into Australian landfills annually.

In 2013, an approximate 40 millions tons of e-waste was generated worldwide. Australia contributed less than 1% of that figure, but that still represents a huge mountain of electronic rubbish that could have been collected and sent to a waste management facility.

Australia's National Television and Computer Recycling Scheme is particularly forward-looking because this environmental initiative is a prime example of thinking globally while acting locally. E-waste is a health and environmental threat that isn't easily localized. Approximately 13% of the world's e-waste is shipped to developing countries which do not have the most stringent environmental regulations. In informal recycling centres in emerging economies, e-waste is often incinerated when useful materials cannot be further extracted from it. These open fires release a host of toxic chemicals such as mercury, lead, cadmium, nickel and brominated flame retardants that enter the atmosphere, waterways and soil. These contaminants then find themselves in crops and ultimately in humans, causing health problems ranging from respiratory to cardiovascular diseases. When e-waste is irresponsibly disposed of, the dangers know no borders.

E-waste is a complex issue to tackle because ultimately the burden of responsible behaviour falls on the shoulders of every individual and business which uses electronics. The more people that require buy-in to a project, the harder it is to achieve a high success rate. It is imperative therefore that e-waste management initiatives strive to incorporate every stakeholder group in a way that engages them and caters to their individual needs.

The National Television and Computer Recycling Scheme requires that government, industry and citizens collaborate and each group has a role to play. The national Department of the Environment predicts that the Scheme will increase the recycling rate of e-waste from 17% in 2010 to 80% by 2022.  In fact, the Scheme's Annual Outcomes report for 2012-2013 states that this goal is well on its way to becoming a reality. Of the approximate 137,756 tonnes of computers and televisions that reached the end of their useful life in 2012-2013, 29.6% was recycled. This is just 0.4% shy of the goal of achieving a 30% recycling rate, representing 41,327 tonnes of e-waste, that wouldn't end up in a landfill. The Scheme will continue to play a major role in reducing the amount of unwanted electronics that wind up in Australian waste bins and landfills as consumption of electronic goods continues to rise.

South Australia should be proud that its Zero Waste agency spearheaded its e-waste ban rather than simply following national standards and that it continues to strive for excellence in product stewardship and environmental responsibility. As attitudes towards waste, and e-waste in particular, change from that of a liability, to that of a potential resource, recycling and resource recovery rates will continue to increase.